Making decisions in the industrial world on which supplier of technology to partner with is a tough business and hence career decision for all the reasons that you know perfectly well. In looking to make the best decision possible, we are fortunate that the industrial sector has always been very conservative in its adoption speed of new technology. The cost associated with even a short unplanned downtime of the production facility has ensured a very cautious and detailed analysis before take up. Added to this has always been the very proprietary nature of the control software offered by the most significant suppliers. Proprietary software by its nature restricts innovation.

This same conservative outlook does allow us to look to other sectors which have already adopted technology so that we can gather crucial pointers for our decisions and reduce the possible future outcomes that are negative.

The Internet of Things provides us with this opportunity. Using an argument from Peter Levine a highly regarded IoT investor let me show you how.

The current IT world builds on a centralised model.

This model is the latest in a series since the start of the computing era. 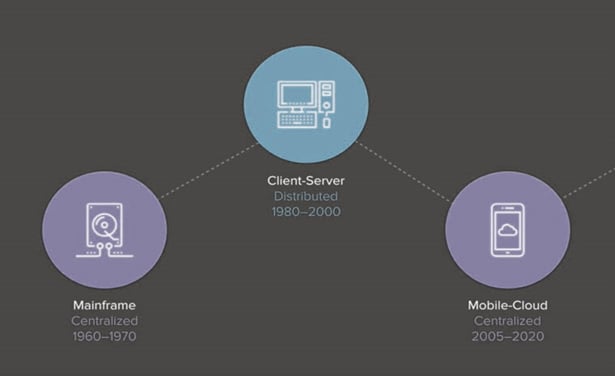 If you are as old as some of us here at EXOR International you can remember the mainframe period where there were maybe 10,000 mainframe computers in the world, each the size of your current home and each requiring an appointment to have some work done on it. A highly centralised model.

Then with the advent of the PC in the 1980's we slowly moved to a more distributed model where the unique selling proposition was that data and computing power were available in the PC, so there was no need to use mainframes for 90% of the work required.

As mobile devices and in particular smartphones became more used we returned back to a centralised model.

However with the internet of things we have begun, for the first time in the history of computers, to collect real-time data and the quantity of this data is massive: a Tesla car produces over 10GB of data every 1 km and a Jumbo Jet produces over 20Terabytes every hour of flight. These are enormous quantities of data that bring into question the ability of the cloud to realistically operate.

As well as the quantity of data produced, the IoT edge devices themselves are becoming rapidly more sophisticated. What started as autonomous cars is moving to drones, robots and other IoT devices. Due to the latency of the centralised cloud model as an SMS or a google request, the processing of the data needs to occur at the edge. For example, a Tesla car that sees a STOP sign will have run down ten people and crashed into five vehicles by the time the analysis has been completed, and the instruction from the cloud has returned to tell it to stop. Therefore these edge devices are becoming loaded with computing power and are effectively data centres themselves.

The combination of massive amounts of real-time data and the requirement for real-time processing at the edge is causing, beneath our very noses a return to a distributed model. In this model, the cloud becomes the place where learning takes place and the last point of long-term data storage with most of the processing needs bearing at the edge. Peer to peer communication where devices speak and interact with other devices will create the challenges and opportunities in this new era especially if you consider the security implications of this model.

In the industrial world, we are entering the era of the centralised model with more market agreement on the specifications needed for the adoption of an industrial cloud.

Today the predominant market need is to acquire data across a still highly diverse brownfield protocol environment and then to store and visualise this data, manipulated where needed into useable KPIs. There are very few Industrial clouds available on the market that satisfy these requirements, and yet your decision of which cloud to adopt cannot merely address your current company needs. Given what we can glean from the IoT model changes mentioned above we can try to reduce the possible future outcomes of industrial technology that today's purchase will not accommodate:

How Component Manufacturers Use SOM Technology to Implement Industrie 4.0
What is Servitization?
What is Digitalization?
How Data Solves Many Industrial Problems
Visions of the Future: Fusion of OT and IT