In the last article "Your Industrial Cloud Choice" we proposed that the choice of the correct cloud would have to include some thought towards the emerging intelligent edge. I wrote that the combination of massive amounts of real-time data and the requirement for real-time processing at the edge is causing a return to a distributed computing model. In this model, the cloud becomes the place where learning takes place, and the last point of long-term data storage with most of the processing needs bearing at the edge. I proposed that this trend is so dominant that it will also occur in the industrial world with more intelligent edge devices.

Without taking account of the trends in the IoT world, there are those that look just in the industrial sector who believe that more processing power will need to be driven towards the physical devices:

Using the table above the industrial advocates of the intelligent edge state latency, predictable connectivity and data security amongst other reasons. Let us look at each of these reasons:

Latency has been a tremendous issue for the industrial world but might not be going forward as and when Time-Sensitive Network becomes commonplace. However, as I write there are no agreed standards and even when they come into place, this will only effect greenfield sites. Brownfield sites will remain in this sector for many years to come.

Predictable connectivity is also breaking down as an obstacle as the standard of communication OPC UA becomes used in more and more machines. The old closed proprietary protocols that the larger companies have attempted to maintain are giving place to more open systems of communication. Again, however, this refers more to greenfield sites than brownfield, and the adoption cycle will last a few more years yet.

With data security, it is simply true that the closer to the edge source that the data processing takes place all other things being equal the lower the chance of breaches of data security.

So although the main reasons for a smarter and more intelligent edge offered by some industrial elements are being replaced with new technology it is nonetheless correct to say that these new communication and standard protocols are yet to be fully delivered to the market.

What exactly then do I mean by smarter or more intelligent? To answer this let me refer to the work of Peter Levine, the renowned IoT investor.

To explain the workings of future edge devices, he speaks of a system of training for US fighter pilots called OODA. The OODA loop is the decision cycle of observe, orient, decide, and act, developed by military strategist and United States Air Force Colonel John Boyd. Boyd applied the concept to the combat operations process, often at the operational level during military campaigns. It is now also often applied to understand commercial operations and learning processes. Looking at the flow diagram of this system, you can see many parallels to the information systems required at the edge in industrial environments.

He believed that if this system could be taught to fighter pilots as a loop and then practised to reduce the loop time, then they would win every dogfight.  The most important point about the system was that it prioritized agility over power which is the same in the new paradigm to which we are moving in the IoT world.  The endpoint device is nowhere near as powerful as the cloud yet is far agiler, and it can go very fast because the edge device is processing the only the information it needs.

The sense, infer and act loop at the edge is identical to the observe, orient + decide, act loop: 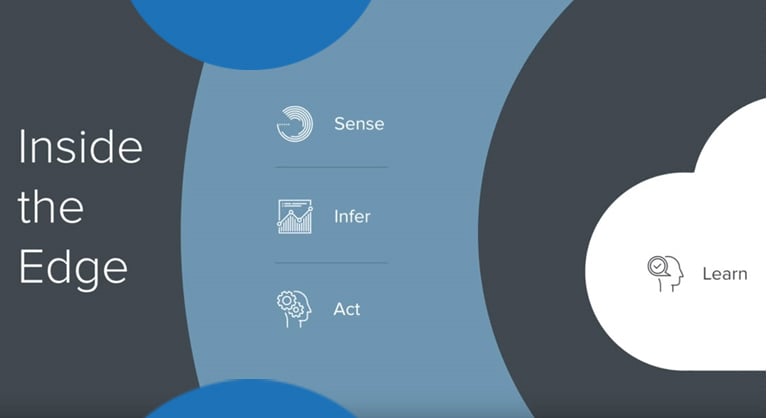 The edge, the intelligent edge is all about agility - taking in the real-time data and processing what it needs. The taking in of real-time data will mean not only the need for universal connectivity via the vast number of Industrial protocols that currently exist but also going far further than currently in the industrial sector.  There will be an increasing requirement for the ability to sense the environment in which the edge device finds itself. This capability starts with sensors for:

In a future where sensors will be everywhere, not only in highly sophisticated devices such as autonomous cars but also in common elements found on the factory floor with the need for there to be a focal point for the collection of this sensorial data, the checking of parameters and possible action before sending surplus data to the long-term collecting and storage area of the cloud ( Sense -Infer- Act ) and it is easy to envisage that the edge device that was once humbly called a Human Machine Interface will need to become genuinely interactive: The Intelligent Edge.

How Component Manufacturers Use SOM Technology to Implement Industrie 4.0
What is Servitization?
What is Digitalization?
How Data Solves Many Industrial Problems
Visions of the Future: Fusion of OT and IT